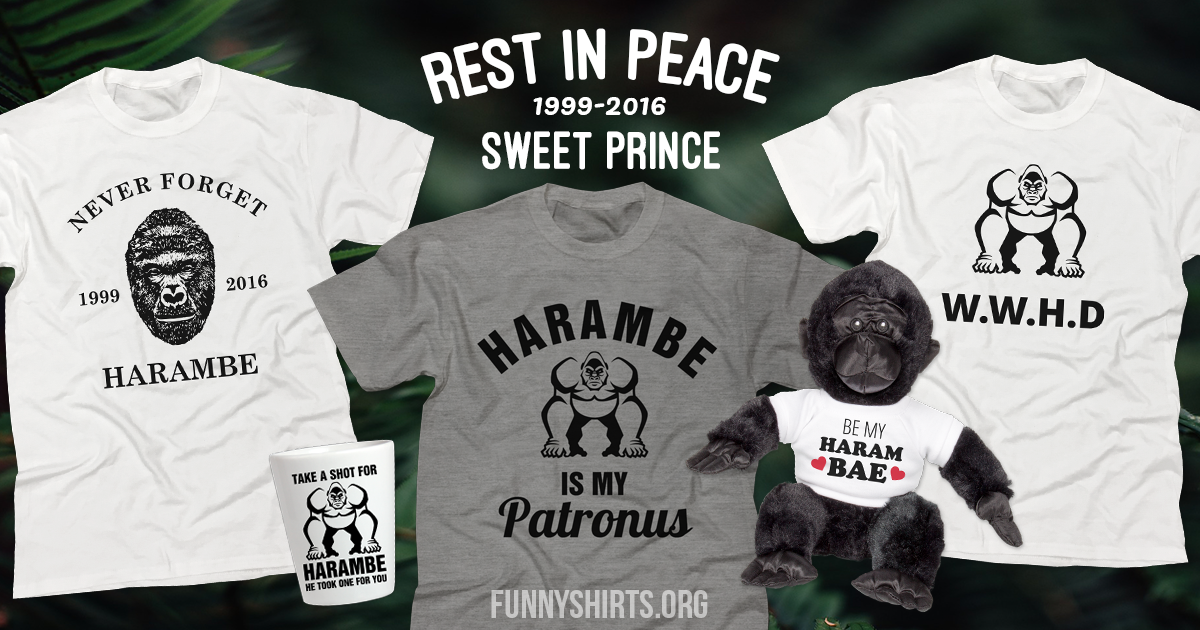 It’s hard to imagine that an entire year has gone since the tragic death of the gorilla Harambe. May 28th marks the one-year anniversary of Harambe’s death and while he may be gone his spirit lives on through memes, clothing and even song. As a result of his untimely death, his image was spread far and wide throughout the internet and became the meme of 2016. Social media has given everyone a gift by offering a happier and downright funny look in glorifying Harambe. In honor of Harambe, FunnyShirts.org wants to celebrate and commemorate his memory with the best Harambe shirts. 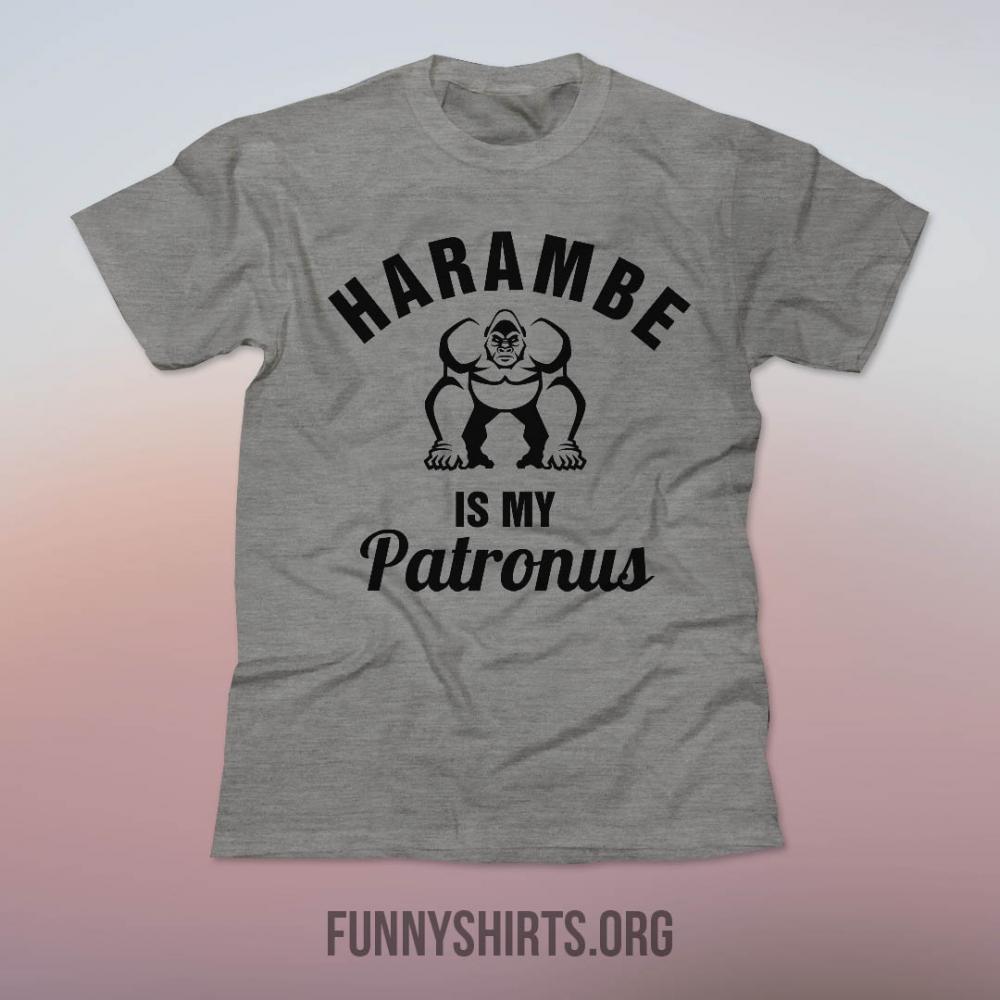 He protects me everywhere I go. 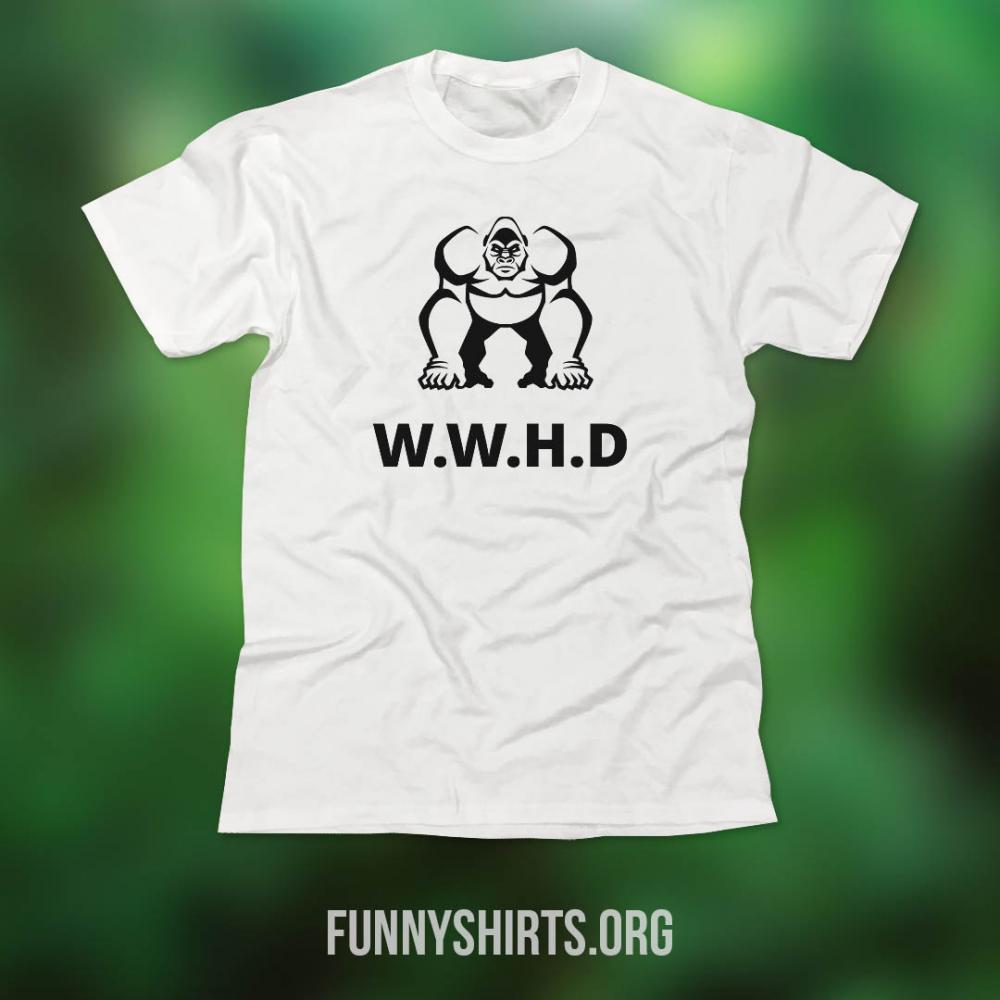 When you have a big decision in life just think – what would Harambe do? 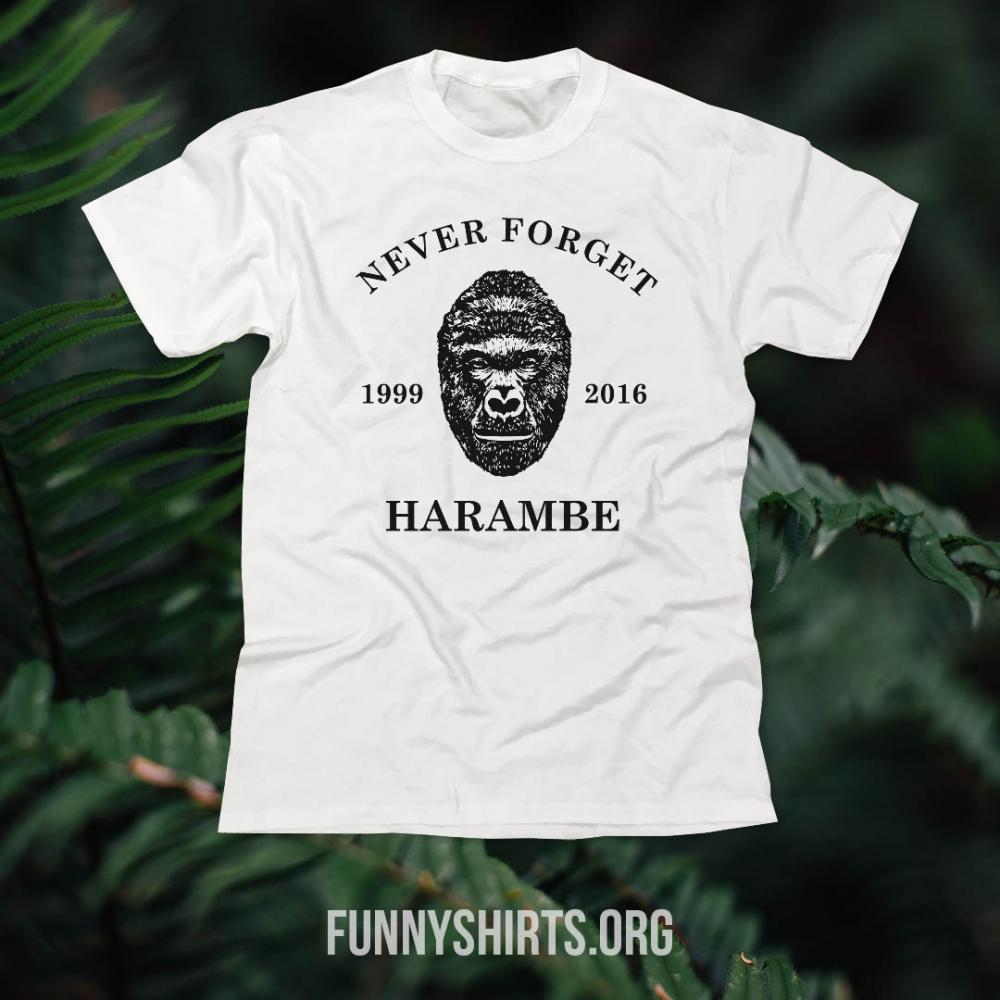 This is only a small portion of what FunnyShirts.org has to offer. Our gallery contains a large collection of designs to choose from and all with the ability to customize. All you have to do is pick your favorite design and swap it onto your favorite clothing style or accessory. FunnyShirts.org has a great selection of apparel that ranges from t-shirts to jackets. You can even create Harambe memorabilia every time you take a shot in his honor. Never forget – He took one for you. 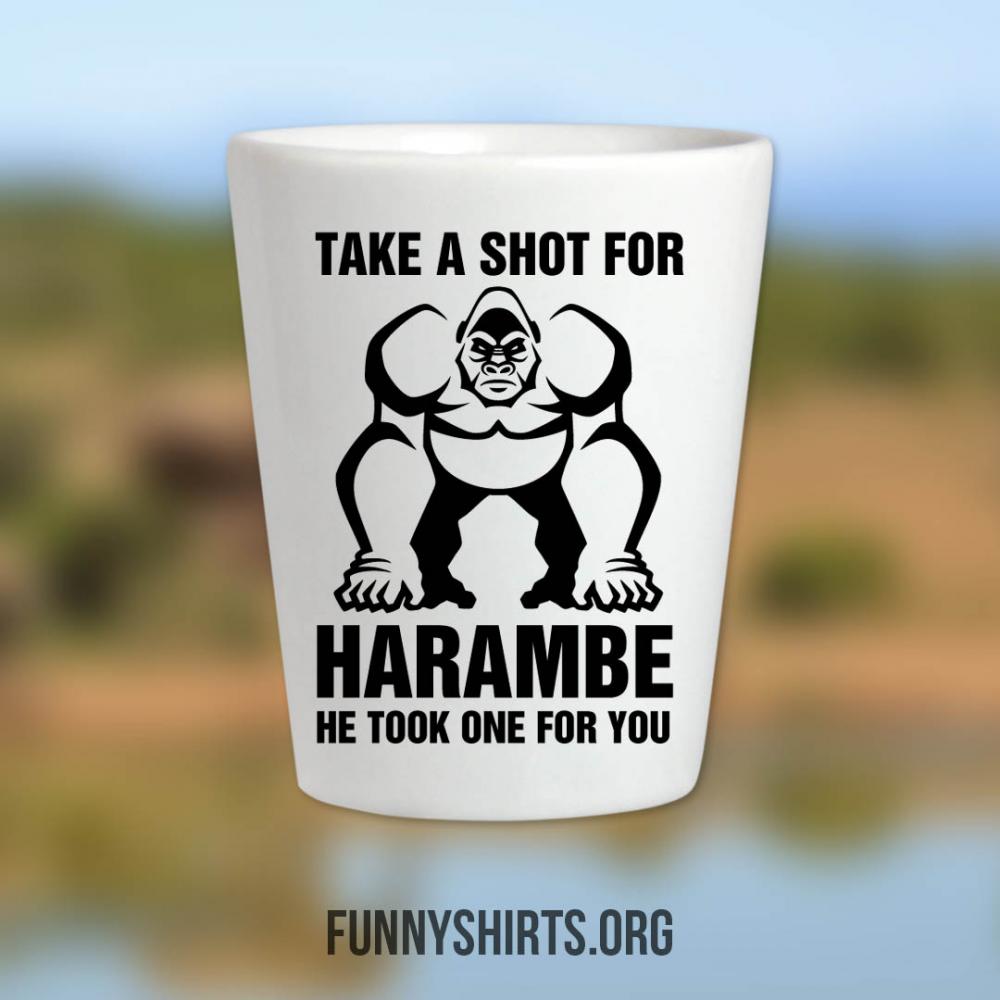 It is important to note that the Cincinnati Zoo is opening a newly-expanded Gorilla World exhibit that will offer an improved outdoor habitat for the 10 remaining primates. Gorilla World is set to open to the public in June and will give visitors a chance to see their favorite gorillas all year long. 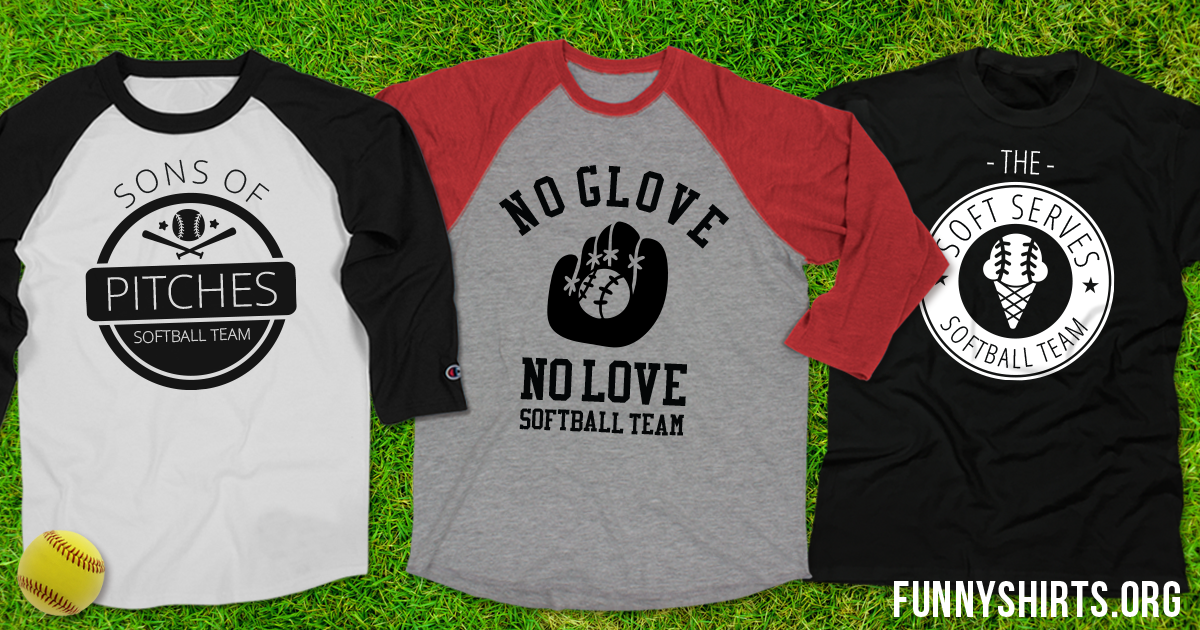 Slow pitch or recreational softball isn’t just about getting together with your coworkers or old high school friends anymore. When you strut your stuff onto that diamond you must have the cleverest and funniest team name to show everyone else who’s boss. Plus it’s very important that Bob from marketing knows that you are better than him. No one thinks Swingers is funny anymore, Bob. With that being said why just out-play the competition when you can out-name them as well? FunnyShirts.org has provided our list of funny softball team names that will get you a laugh on the field and maybe even noticed by your boss. 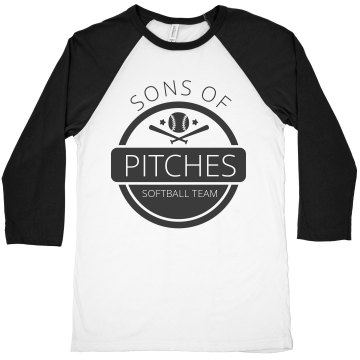 Son of a pitch. 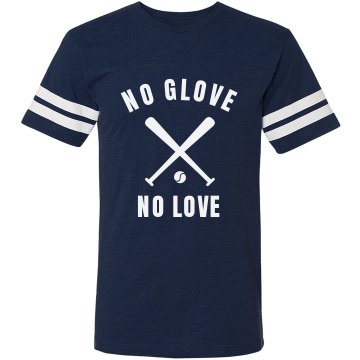 Can’t hit if it doesn’t fit. 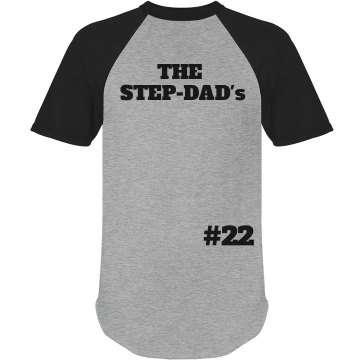 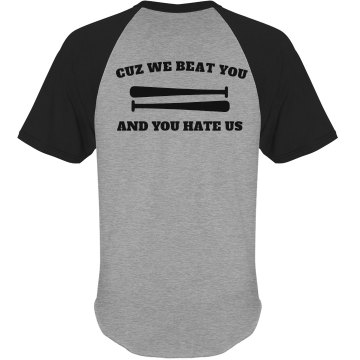 This is only the beginning of what we offer here. Our gallery contains endless design options to choose from and the ability to customize – all you have to do is add your team name, number, and colors or simply create your own unique design from scratch with your team slogan or business logo. FunnyShirts.org has a great selection of apparel that is perfect for your team. From raglans to jerseys and even vintage style tees but we also offer custom socks and custom bags that you can easily create matching designs on each item. Just think, you can revel in the glory and truly rub it in their faces with a custom coffee mug that states “I beat Jim.”

Show us your team kicking butt and taking names by tagging us @funnyshirtsorg via Instagram.

Feel the force with custom may the fourth be with you shirts. Use coupon code below to save!